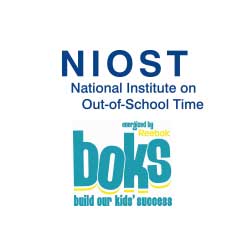 How does children's participation in a before-school physical activity program impact their families? A new study of one HOST member shines some light on the answer.

Build Our Kids' Success (BOKS) is a before-school physical activity program, sponsored by the Reebok Foundation, which began in 2009 and is now offered in over 2,200 schools worldwide. BOKS also tries to help children incorporate principles of healthy nutrition and wellness into their daily lives.

A child's participation in BOKS influences changes in their family's attitudes and behaviors towards physical activity and healthy eating, according to a new study by the National Institute on Out-of-School Time (NIOST).

Of the parents surveyed, 54 percent indicated that they are somewhat more and 13 percent indicated much more physically active since their children started BOKS. Fifty-nine percent reported that they are less sedentary and 28 percent said they engage in a greater variety of activities. More than a third (39 percent) reported increases in their family's level of interest in physical activity and almost 30 percent expressed an increased awareness of the need to exercise.

Parents reported many examples of children taking initiative to introduce new physical activities to the family that families could then engage in together such as bike rides, visiting the park, and walking.

Again, children often initiated these changes. Parents said that children will bring home ideas from the nutrition curriculum and talk about what types of food are healthier.

A child's participation ... can influence the attitudes and behaviors of her/his family as well as reinforce positive messages about health, fitness, and nutrition that parents may already be promoting.... The child's experience can catalyze her/his family to exercise and be more active together, especially when there are clear pathways for engagement, such as participation in a gym or walking together. Increased engagement in physical activity and healthy eating is activated through the child and her/his behaviors and attitudes, not through the program itself.