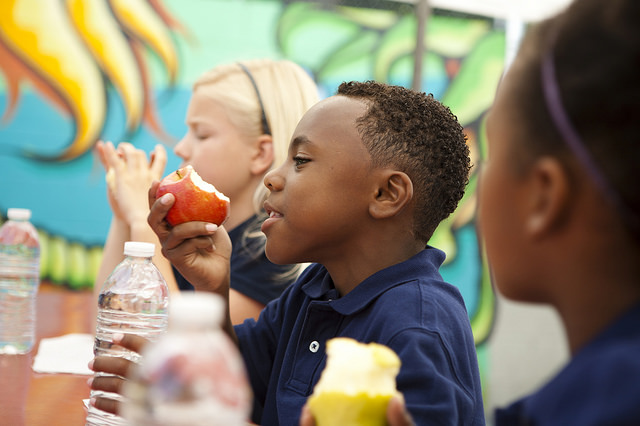 Most afterschool programs in the U.S. offer fruits and vegetables to children, and doing so is associated with membership in the National AfterSchool Association (NAA) and awareness of its Healthy Eating and Physical Activity (HEPA) Standards, according to a paper co-authored by NIOST researchers.

Children in the U.S. eat about two-thirds of the recommended amount of fruit and less than half the recommended amount of vegetables daily, according to the Centers for Disease Control and Prevention (CDC). NIOST Research Associate Amanda Richer and NIOST Director and Senior Research Scientist Georgia Hall, along with researchers at RTI International, surveyed nearly 700 NAA members and their colleagues to estimate the frequency and quality of fruit and vegetables offered during snack in U.S. afterschool programs.

Factors independently associated with offering fruit, vegetables, or both were membership in the NAA, using the NAA HEPA Standards for menu planning, and training staff members in healthy eating more than once a year. Programs run by school districts were less likely to offer fruit than programs run by other organizations, such as YMCAs, Boys & Girls Clubs, and parks and recreation or faith-based programs.

There is no national set of standards for food served in afterschool programs, the researchers note, but many programs have fully or partially adopted the NAA HEPA Standards, which include recommendations to offer fruit and vegetables daily. These standards were developed by the Healthy Out-of-School Time (HOST) Coalition, of which NIOST and RTI International are members, and were informed by NIOST research.